The property inspected was built in modern cavity construction and the walls incorporate a physical damp proof course from when it was built. A damp-proof course is a barrier, usually built into the walls of a property to prevent damp rising through the walls. Historically, damp-proof courses may have been formed using bitumen, slates, lead, pitch, asphalt or low absorption (Engineering) bricks. They emerged during the Victorian era and are commonly found in buildings from around 1900.

The client contacted us to report signs of dampness at low level to several of the internal walls.

The plasterwork was also visibly crumbling along the base of the walls.

As with any damp survey, the first step was to enquire with the client as to whether there had been any water leaks or if water pipes passed through the areas where dampness was being reported.

Once these first possible causes of dampness had been ruled out, it was then time to investigate further why the base of the walls were damp.

An electronic moisture meter (Protimeter Surveymaster 2) was used to gain a moisture profile from the walls identified as possibly being damp.

We use electrical moisture meters to obtain a “moisture profile” by taking readings at regular intervals (usually 100 mm) vertically up the walls being investigated. These readings may be attributable to various forms of damp and this enables us to form an overall impression of the cause of any damp found.

It is important however to state that electronic moisture meters only provide qualitative readings when testing masonry (Wood Moisture Equivalent WME%).  It is for this reason that diagnosis should not be made purely based on these readings alone. It takes a skilled surveyor to interpret the readings along with other evidence such as visual observations before coming up with a possible diagnosis.

In the case of timber, an electronic moisture meter provides quantitative readings (Wood Moisture Content WMC%). These readings are very useful as they provide an actual moisture content of the timber.

In the case of the property being inspected, we found a moisture profile that showed high readings along the base of the wall to a height of approximately 250mm. We also found high moisture readings in the skirting boards.

Based on the profile gained and the high moisture content of the skirting boards, we suspected that there was a floor/wall junction issue/bridged damp proof course.

After gaining permission from the client, we were able to remove the skirting boards to investigate further.

Once the skirting boards were removed, we discovered that the plasterwork on the wall had been taken down to floor level and was in fact finished slightly below the finished floor screed.

We then removed some of the plaster to reveal the original physical damp proof course which was positioned at the very base of the wall.

This technique works by testing a weighed sample of drilled masonry that has been taken from a sample area such as a mortar joint located above the damp proof course. The sample is then placed in a container. A measured amount of calcium carbide powder is placed in a separate portion of the container, and then the container is sealed. The container is shaken, and the two substances mix together to trigger a reaction that produces acetylene gas if moisture is present.

The meter will indicate the results of the test on a pressure gauge.

In the case of the property inspected, the results of the test showed a very low moisture content in the masonry (less than 5%). This suggested that the damp proof course was working and that the only issue had been the low levels of dampness rising up the plasterwork due to the bridged damp proof course/floor wall junction issue. 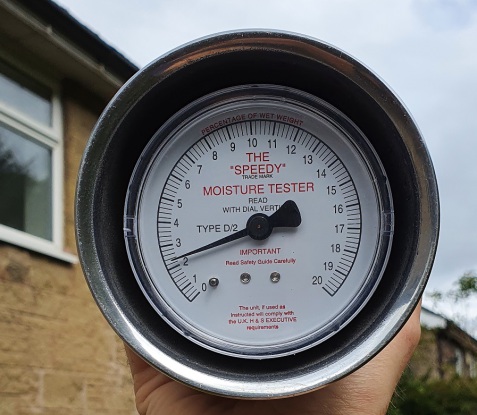